We aim to breed  healthy, nice tempered and breed typical dogs - in that order. We hope that our ETTs will make great pets and family members to sporty people who like to activate both themselves and their dog!

Read more about us here.

By breeding miniature schnauzer, I have learned a lot about breeding. To some extent, I think you learn to actually tell which couple will be a good breeding- combination and which will not. I work a lot with mentality evaluations and test almost all my breeding dogs with one of the Swedish Kennel Clubs Mentality-evaluations tests.

I have also learned to keep and maintain a width in my breeding and not to sift too hard. I have often kept siblings in a litter if, for example, they had different positive qualities. One may have the appearance, but the other has the temperament - and I have been able to breed on them with good results. In this way, I could also afford to choose not to breed on one, or just have one of two planned litters if one of the siblings does not really measure up.

More healthy dogs in breeding is a good and long-term strategy for me!

It may sound lofty, but all breeders have a goal with their breeding - and a philosophy. You do not reach your breeding goals right away, or even in a few years - but you are satisfied and content every time you get to feel that it is going in the direction you have intended.

For example, I can see that a certain bloodline has "the perfect look" - that nice profile, the construction, that beautiful face I want - but then again,  maybe I do not like the temperament, I might want more confident dogs. Sometimes I also wish to find an exciting pedigree, which no one else has managed to continue with in breeding, but which has something special - good angulation in the shoulder and withers for example - some trait that may be very difficult to find in the breed. Then it is important not to lock yourself in old conventions or do as everyone else does - but listen to your heart and make the combinations you believe in!

In any case, it is very rare for a single dog to have everything, so I believe it is better to invest in a breadth of breeding and spread the risk, rather than using only a few breeding animals, just because they are champions in several countries.

Last but not least: health must be taken into account. Now I mention this important point as number three - but healthy dogs are the basis to all breeding of course. It is easily said but it's actually not always that simple! Some recessive diseases can lie and lurk in the genes and cause disease only when you happen to combine two pedigrees that both have those genes, without knowing it. And some genetic traits can only begin to show after several years, perhaps at older age.

These are the reasons why you can not just take two nice show dogs and expect good offspring - because there is so much more to take into account. Many other traits that are actually more important for a happy and healthy life.

Finally, after many years of working towards your breeding goals, you  may experience that the majority of all puppies you get, actually have that look and get that great in temperament you strived for all that time!

How rewarding, that is my dream!

It is very exciting, challenging but also rewarding to be a breeder. I really think everyone who has tried it would agree. But it can also be difficult and you can have setbacks - because genetics is a difficult matter and can offer surprises, no matter how well you have prepared, studied and talked to breeding colleagues.

When I started studying the breed English Toy Terrier, I realized that it would be a challenge! The breed is really tiny in Sweden and if I were to get hold of a breeding quality bitch at last, I would have just the same difficulty finding her a suitable mate. So I decided to start up the same way I did with my Miniature Schnauzers. I did not want to paint myself into a corner, as I have seen other breeders do. And I did not want just one bitch to start with, meaning that all my effords would be based upon only one single pedigree: I want several parallel bitch lines. In this way, I can build up several bloodlines with different characteristics, which are not related.

Minimizing inbreeding is crucial in a genetic point of view - especially in a small population, which the ETT breed certainly is. If you look around in pedigrees today, you quickly see that the same dogs occur again and again - and in a numerically small breed, that is devastating in the long run. Now I realize that I am not the savior of this breed, but I like to think my way of breeding makes a good contribution to it.

The ETT has already been so heavily inbred, that serious measures had to be taken to broaden the breeding population - such as allowing the import of Toy Manchester Terriers for re-registration to ETT here in Sweden. And if we have such an opportunity - then we will take advantage of it!

"JUST A BUNCH OF DOGS"

Already when I had only had two litters, I was critizised because the imported dogs I had came from a lot of different places and all have different appearances. "They're just a bunch of dogs." And I appreciate criticism and honesty. But I am very pleased with my dogs and they all fit perfectly into my plan. They are all outgoing and very sound individuals. They are different in both personality and appearance, but they all contribute to the breed and to my breeding. One of them has that body and posture, a nice topline. The other has a perfect bite, strong teeth and dense fine coat. The third is extra safe and socially intelligent - and so on. I have chosen them with care!

It will take a while, probably several years, before you can see an ETT and say that "That's a TrePés-dog" - but I think and I hope that it might happen one day. And it does not have to be the look of it, but if you can meet the dog and say "Wow, what a sound personality! -It must be a TrePés-dog!"

THAT is when I get really proud and satisfied. 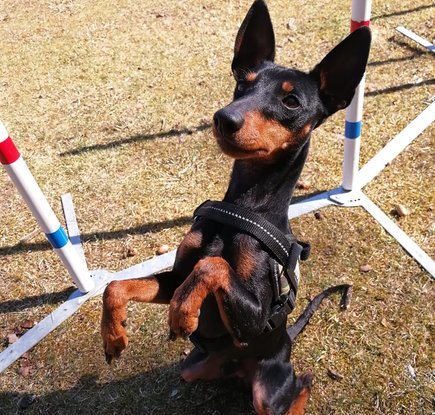 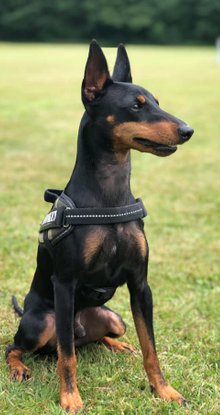 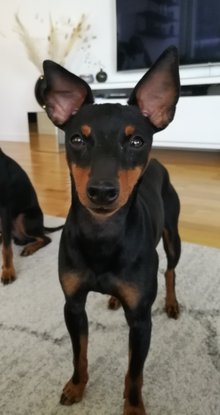 I am Certified by the Swedish Kennel Club, Svenska Kennelklubben and I am a member of Terrierklubben.

If a kennel has more than 2 litters or more than 10 dogs, special permissions are needed from the County Administrative Board. And we do!

Healthy dogs are happy dogs - and they make their owners happy! We will strive to make all necessary tests for our breed to make sure we use healthy dogs in breeding.

Do you want to learn more about Ett-healh?

We are members of: